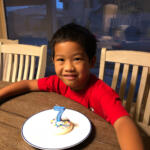 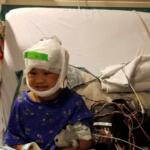 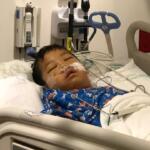 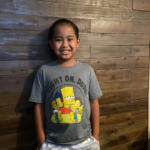 A couple of weeks after Isaac’s seventh birthday that falls on October 31st, he became sick with what they thought was just a cold or a virus. His mom Alona said, “I didn’t think anything of it, we would give him Tylenol to help him with his fever, and then let him rest.” But he was just not himself. “I’ve never seen him sick like this, not be running around being a crazy tough kid.” says his mom. One day, he woke up around Thanksgiving, and his eyes were yellow, and his urine was brown. “I knew something was wrong. You know, the parent in me, I start googling it in the hopes to find something about a virus or flu strain. “

They rushed him to the pediatrician, and once he felt Isaac’s belly, the doctor also knew something was wrong. The pediatrician said, “We need you to go to Phoenix Children’s, right away.”

They immediately went to Phoenix Children’s Hospital. “We were there six maybe eight hours? The doctors inquired ‘Is anybody else sick?’ ‘Do you have any pets?’“ said Alona. Finally, the primary doctor, a liver transplant doctor, came in and said, “You know what, your son is in acute liver failure.” This news came out of nowhere because Isaac was rarely ever sick. This news was a punch in the stomach, so to say.” From there, they were admitted and all the tests began. They did biopsies to determine if it was a condition that could resolve on its own or through medication, but the results came back as idiopathic. Which means they don’t know why his liver failed at all. Alona wondered, “What did we do wrong? Did he take something? Is it genetic? We don’t know?”

Twelve days after arriving at Phoenix Children’s and making it their second home, he was listed at status 1a. Top of the list, which is both a blessing and curse. What’s worse is, he didn’t feel sick. He was just an ordinary seven-year-old boy. He couldn’t understand why he couldn’t eat? Or why the hospital team kept probing him? Finally, Alona and her husband were at their wits ends. They were frustrated. Being an advocate for their son became their number one job.

Being thrust into this medical world and seeing doctors day in and day out, there was a lot of medical jargon. It was hard for them, as it would be anyone, to understand. So, they decided to call a conference with their team and figure out what was Isaac’s best next steps. It was surreal for Isaac’s patents to walk in to the conference room and see his case on the board. Because a liver-living donor program was not yet established at PCH, their only choice was for a deceased donor to become available.  Alona thought, “ We can’t pray for somebody to pass away to save our child, right?”

Luckily, the lead hepatologist had some contacts at Stanford Hospital.  Pediatric transplant is often a very collaborative community throughout the nation. She reached out to see if Stanford would accept them into the pediatric liver program. They had a long-established network for living donorship. It was November 30th when they received the final word that they would be transferred over to Stanford – Lucile Packard Children’s Hospital.

Alona got on a plane with her young son, leaving behind her husband and daughter. Her daughter was frantic. She asked, “Why do you have to leave? What’s going on with my brother?”

Alona and Isaac arrived at LPCH on December 1st, in the middle of the night Alona was tested immediately to see if she could be a match for Isaac. Sadly, she wasn’t a match. She felt horrible that as a mom she was not a match. Next, the team wanted to test her husband as soon as he arrived.

On December 2nd, while her husband was boarding a plane, the doctors came in and said, “You know what, we have three donors that would be a match for your son.” After one day of just being there at the hospital! He fitted for an 18-year-old who would split the liver and give it to another patient, and we would take the other half. So that was all set. We were going to do that.

On December 3rd, his actual transplant anniversary date, the doctors came in a couple of hours before Isaac’s surgery and said, “you know what, we have an even better option for your child.” They would use the whole liver from another child and put it into his body. Believe it or not, it came from Arizona.

After the surgery was a success, they took off his breathing tube right away. The first thing after surgery, he asked, “When can I eat?” When you’ve been MPO as a child for so many hours, all they’re thinking about is food. He wanted random things like cheese and bananas.

A couple of weeks after later, doctors noticed his bilirubin numbers coming down.  There was a follow-up biopsy to figure out what was going on. They discovered it was a kinked bile duct because the liver was a little too big for his body. Surgeons created new bile ducts and everything seemed to be in alignment.

The struggle was real giving Isaac medication. He couldn’t keep his tube, and blood draws was another challenge altogether. It was just Alona and her son navigating though the post-surgery care; her husband and daughter had to go back home for work and school.

Alona would ask, “Okay, when can I go home? I’m ready to go home.” It was very tough on her as a mom and a wife. She had family there. But it’s not the same as your immediate family. Alona is very thankful for organizations like Ronald McDonald, where they stayed and didn’t worry about the cost.

All the notes from his doctor at Stanford kept Phoenix Children’s up to date. Alona says, “I love their partnership. They have a great relationship between the two hospitals, which is amazing to me, and just shows how small and caring our community really is.” They stayed for three months before being able to come back home to Phoenix.

This will be Isaac’s first year back to in-person school. During first grade he got sick, so he didn’t go to school. In the second grade, COVID hit. Third grade was spent primarily on-line.  His on-line learning was going well, he struggles with the social aspect of school, working, playing and working with other people.

Physically and medically, Isaac is doing well. He just had his last blood draw. Bilirubin numbers look good. No changes to his medication or routine. Alona says, “Unfortunately, though. We did find out this year that he’s pre-diabetic. And it’s a mixture of COVID inactivity and his progress.  So, that’s hard.”

Alona admits, that sometimes they feel as if they’re always waiting for the other shoe to drop. When they finally returned home from the hospital, they felt very anxious. They were able to take advantage of the counseling that was provided through their employer. They had free sessions on both sides and were thankful for that opportunity.  This is something she would recommend to any fellow parents struggling.

Alona’s advice is to take help when offered, “Transplant Community Alliance was helping us with some medication issues and then helping us get back on our feet with the medical bills. Just knowing those organizations are available with help is comforting. I don’t think many people realize these options are available.”

He will be ten this October. Yes. During liver month. He loves being around his friends. Alona says, “I hate to be ‘that’ mom. But the only way you guys will go back to school is if you wear a mask.” The good thing is they have a great relationship with the school that he goes to, Skyview Elementary. They have a great 504 plan. The school provides occupational therapists who help him with his handwriting and organization skills. They set him up with a psychologist to help with his social skills.

What advice would you give to another family that’s just starting this journey? Alona says, “Ask questions. It’s okay to ask questions and have doctors re-explain information. Ask the nurses to be in touch with a social worker because they can guide you through it. One thing that worked well in Stamford was a family advocate who came around and spoke with parents. It’s okay for your child to speak up if something doesn’t feel right. I appreciate that about Isaac, when it comes to blood draws, he knows which nurses can get the blood drawn on first try as asks for them in his own way. He was learning to advocate for himself. He was an advocate for his medication, too. He said. “I’m ready to take pills now.” So that is when we made the switch over to oral medication.  I figured it’s better to keep him involved. Even just showing him, which medication is for your blood pressure, explaining it to him so that he knows what each pill is meant to do. I didn’t like sugarcoating or lying to him.“

Today he tells people he’s proud he got a liver. “My name is Isaac. I got a liver from somebody.” He’s working on being more active every day.  He earned his purple belt in Taekwondo, and we are super proud of him!