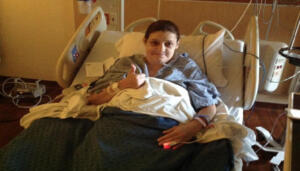 Lynn Stackrow wanted to “make life happen.” She was once on the brink of death but is now spreading her legacy of inspiration and awareness of cystic fibrosis by serving as a spokesperson.  From traveling in and out of hospitals to being a mentor for others regarding transplants, let’s hear about Lynn Stackrow’s story.

Lynn was born with cystic fibrosis, a genetic disease that’s responsible for long-lasting lung infections and deteriorating one’s digestive system. In early adulthood, she was taking care of two children and healing from a divorce. Lynn felt helpless. Her family was in Arizona. She was in New York. So, she made the courageous decision to move to Arizona in pursuit of a healthier life. As soon as Lynn arrived, she was evaluated and put on a transplant list immediately at St. Joseph’s Medical Center. Although difficult to envision, she soon will discover that this was the best decision in her life. 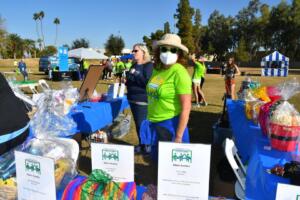 The journey of transplantation can certainly be overwhelming. Filled with many medical appointments, prescriptions, new medical jargon, risk factors, and much more. Luckily, Lynn had the best medical team: a surgeon, several pulmonologists on rotation, one doctor in the ICU, out-patient, and in-patient on rotation, a social worker, and a psychiatrist who prescribed psychotic medication that must be adjusted every three to four months. Ultimately, her transplant coordinators assisted Lynn with self-care post-transplant and adjustment to medication over the years.

July 17 at 9 PM was a call from God that Stackrow was destined to live. Her pulmonologist, Dr. Omar, called her that night to deliver the news that a set of “high-risk” lungs were available. Despite the concerns that were raised, Lynn felt strongly that “God wouldn’t have given me anything that I couldn’t handle. If I was meant to live, then I was meant to live”. She proceeded to her transplant on July 18, 2015, where she was granted numerous more years of life.

The recovery process was difficult at first, but Lynn proved that it wasn’t impossible. Stackrow began to gain strength as each day passed. It began with a short walk, then progressed to longer walks, and within four months she was able to hike, kayak, and play pickleball.

Today, Lynn Stackrow is forever grateful for the transplant and Cystic Fibrosis Foundation because it allowed her to live again.

Being sick since the age of twelve often meant hospital stays of two to five weeks per visit. The memories that she grew up with were therapy, physical training, antibiotics, constant lung infections, wheelchair races, and playing pranks on the nurses.

Stackrow is forever grateful for the wonderful support system she received from her family, who have witnessed her progress to being able to work full-time as a case manager and rehabilitation specialist.

As a passionate spokesperson, Lynn encourages people to consider a transplant, if one is recommended, and also recommends St. Joseph’s. St. Joe’s has an excellent team that’s highly qualified to help others who have been denied by other centers. Additionally, they have performed one thousand transplants with Lynn being double lung transplant #267.

Growing up, she was quite involved with the Cystic Fibrosis Foundation, which is a non-profit organization that researches different ways to improve treatment to ensure longer lives. It was at this organization that Lynn wrote a newsletter and is still passionately connected. As a  spokesperson, Lynn hopes to continue to spread awareness of the benefits of transplants, and the general process, and ultimately see more patients be granted the same chance to live. 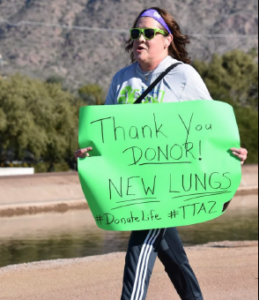 About the Author: Zoe