Perseverance bring new purpose and empowerment to both recipient and community 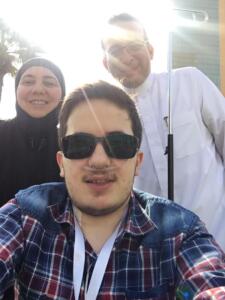 Growing up in Saudi Arabia as the only child of two very amazing parents, Omar Hashem was taught the value of hard work early on. As chronicled in a highlight by his alma mater ASU, he worked for three summers as a teen to purchase photography equipment to pursue his hobby. He also played soccer many hours a day with his friends. Often with many friends that ended up going on to be professional and Olympic players. It was while Omar was playing soccer that he would meet his biggest challenge yet.

When Omar was a teen, he passed out on the field when playing soccer in a different city and was immediately brought to the hospital. This wasn’t the first time he was brought to the emergency room for breathing problems, but it was the first time it was taken seriously. While in the ICU, he was given a name for his condition, Pulmonary Veno Occlusive Disease, which is a kind of Pulmonary Hypertension. PVOD is characterized by the blockage of the blood vessels that carry oxygen-rich blood from the lungs to the heart. The medical team told him he would need a lung transplant, but because the program was just beginning where he was, he was advised to go to a more established center.

Omar came to North Carolina to be listed for a lung transplant. He was given a second chance at life on August 16th, 2016. But with so many other areas in life, Omar would be challenged with this as well. His team began to see rejection immediately. Once they got it under control, they would see it again and again. He began to live with chronic rejection and would have to postpone returning to Saudi Arabia, his home.

Because he knew he would be in the states longer, he applied to Arizona State University. He wanted to pursue his dream of filmmaking while also being seen at St. Joseph’s for transplant care. He went back home to Saudi Arabia to get his visa changed and his paperwork in order for this big move. While there, he was in a dangerous car accident where his car flipped three times. He was nearly paralyzed. But he took his plight as a sign that he was saved for a reason. He began school at ASU two weeks later. 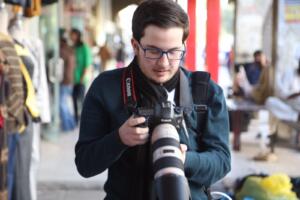 Once at school, he found that he had a lump on his tongue and went to get it checked out. After going to several specialists, they discovered that the lump was a tumor after being biopsied. The tumor was found to be lymphoma. So on top of being a student and a transplant patient, Omar began chemotherapy. Thankfully, the chemo worked quickly and effectively, and his lymphoma would go into remission.

Now it was the summer of 2019, and Omar traveled back to Saudi Arabia for the summer to be with family. He was filming a short film when he felt an intense temperature coming on, and it felt as if his lungs were on fire. When visiting the emergency room, the doctor’s first question after an x-ray was if he was a smoker; Omar assured him he was not and lived a very clean lifestyle. Despite this, his lungs were very cloudy. It was clear that his original transplanted lungs were beginning to fail. He would have to start planning for the path of another transplant.

In early 2020, his lung function was so poor that he couldn’t walk anymore. He was taken directly from school to the ICU. For two months, he deteriorated until he was gifted another chance at life. He received his new lungs and went into early transplant recipient protocol of masking, sanitizing, and isolating, at the same time as the rest of the world was being introduced to the same practices for different reasons. Omar was protecting his new lungs. The world was preparing for Covid-19. 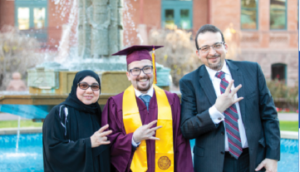 Now at 24, Omar has completed his dream of getting a Bachelor’s degree in Film and Media Production from ASU. He is continuing with his Master’s in Creative Enterprise and Cultural Leadership. He looks forward to telling the many important stories of those that could illicit positive change in their communities. He saw firsthand the impact of his own story in his native country after making a short film promoting organ donation. It received over 2 million views from Saudi’s and got the attention of the crown prince. The royal family is now very favorable to organ donation as a life-saving medical treatment.

Omar credits much of his success to the support of his parents and his Muslim faith. His mother is always there for support. His father is working from halfway across the world to keep providing money for Omar’s future. Despite walking through many challenging times, most of us would ask why me? He knew his story would mean that much more with such incredible perseverance powered by peace and faith.

These days Omar dreams a new dream of a possible Golden Globe or Oscar to his credit. We know with the exceptional gift that Omar has to tell other’s stories as well as his own; this is entirely possible. Let this audience tell you; we will be the first in line to support you.